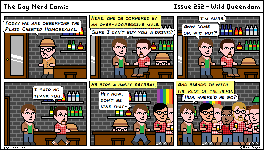 Heya! Yep, I'm still around. Things have been changing a lot, but I had the idea for this comic and had to draw it. I've been keeping busy with other projects. Among others I'm still trying to re-work Codon. Shenanigans are a bit further and farther between at the moment, but I'll still be keeping an eye out for any that might make good issues of the Gay Nerd Comic! 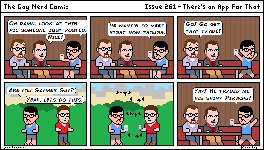 A) Yes, I still play Pokemon Go. The friend/trading system has been pretty neat.

So yeah, I'm still kicking. Life is a little crazy right now. Hopefully I'll get to tell you guys about it soon :) 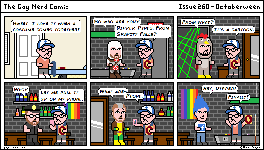 A couple of weeks later, here's what I got up to on Halloween. This weekend is my 4th Annual 29th Birthday is this weekend and hopefully I'll be able to get whatever shinanegans I get up to converted to comic form a bit more quickly.

Also, if you haven't seen Thor: Ragnarok yet, my comic about the first one still applies. 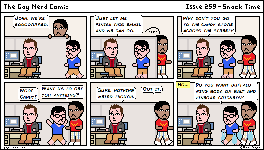 I've always been an adventurous eater. Doesn't always go over well, but whatever. The buffalo wing soda wasn't bad, but the ranch soda we got to go with it was pretty not good. 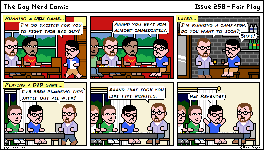 It's really nice being back on the other side of the table after so long.

So for those of you who follow the comic on Facebook, you probably saw that I was worried that I wouldn't be able to pay for this website's hosting. Between the money raised on GoFundMe and other donations, I was able to pay to keep this website running for another two years. Thank you so much to everyone who helped out, I feel honored and humbled by your generosity.

To help make sure that I don't get in a spot like that again for a while, I've decided to open commissions. I'm just doing ten slots to start with and see how it goes. For $10 you can get a Gay Nerd Comic-style pixel sprite of yourself perfect for profile pictures. For $20 you can get a one-panel scene featuring yourself (or whomever), with $5 per additional character. For either one, please get in touch with me via Tumblr or Facebook. 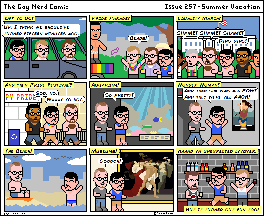 It was such a fun trip! Thanks to everyone who let me stay with them and ferried me around!

In other news, Chapter 2 has started over at Codon. Why not take the opportunity to catch up on Chapter 1? 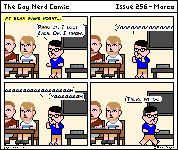 It's like a wolf howl. Once you start, it just gets picked up.

The first chapter of Codon is just now wrapping up! If you haven't taken a look, now might be a good opportunity! 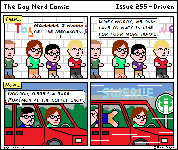 Yeah, I still play Pokemon Go. And my mom is great/an enabler.

Oh and, great news! Codon is back! Yes, now you too can read the story of a gay super villain getting revenge on his ex-boyfriend. For now it's updating every Tuesday and Thursday, so I can get a buffer of new pages built up. Enjoy!

Also, as a side note, how many of you guys are still following here on Livejournal? I know once or twice when the link hasn't worked a few people have spoken up. I keep posting here for y'all but if everyone has migrated to following on Facebook or Tumblr (tagged #my stuff), then it'd be one less page for me to update. 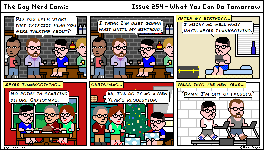 I had actually planned to start exercising waaaaay back before my heart surgery, but needless to say it got postponed until afterwards. Kinda just...kept putting it off from there. But thankfully I have FINALLY managed to start going. Woo!

And speaking of things that have been a long time coming, Codon, my other comic about a super villain trying to get revenge on his ex-boyfriend, is finally coming back! Stay tuned here for updates! 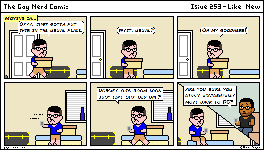 This is the room I'm talking about. It's really weird, I didn't notice it until I actually got my stuff moved in.

I hope you all had a Happy Holidays and fun New Year's. You may have noticed that I decided against doing a recap comic both for my absence and for 2016 in general. Both were too...eventful to be done justice. So onward and (hopefully) upward!